As this is my first actual post I thought I’d write about something I’m a big fun of, tooling. More specifically I want to describe my workflow when working or in general when using my machine.

My general goal is to be productive in my day-to-day routine, and automate everything that can actually be automated so that I can focus on the higher-level tasks I’m interested in. I admit that sometimes I’m overdoing it and automate a task that I don’t actually have to but all in all I think this attitude has helped me considerably so far.

I’m also a big believer in open-source. I’m striving to publish all my coding projects on Github (see my pinned repos for some of the works I’m proud of) and I’ve also been mentoring for the past two years for the Google Summer of Code Project with the MRPT robotics organisation. Thus, I’m trying as much as possible to use open-source alternatives for all my tasks. That being said, if there is a paid-for tool that does something great I’m happy to pay for it (e.g., see the excellent C/C++ Code Explorer - Sourcetrail).

Here’s a bullet list of the software I’m using:

Let me now elaborate on the bullets above.

Linux is free, as in freedom, it’s ubiquitous and is simply the bestest operating system there is 😏. Regarding flavour, I simply use Debian or Ubuntu as the main operating system just because I feel most comfortable in these systems It’s nice know how to open all sorts of files (xdg-open/xdg-mime) search for package names (apt-cache) install packages / download sources (apt-cache, apt-get, dpkg) and in general know how your system works. Also being a roboticist by profession, there is a strong inclination towards Debian / Ubuntu since ROS (1) ships binaries for specifically for these platforms and it’s a total PITA to compile it from source. Finally I consider it a big deal to always have a stable system even if that means not compiling your project with the latest and greatest gcc-8 compiler. Ubuntu and Debian give you that and also provide ways of installing more recent versions (linuxbrew, Ubuntu PPAs) and hey, you can always compile stuff from source if the previous don’t work for you 😉

There is a gazillion of articles on how to use vim or what to put in your vimrc so I’m going to keep it short here.

Here are some of the plugins that I use on a daily basis and I’m confident have boosted my editing efficiency significantly. Refer to the corresponding READMEs for more details:

The important thing to note here is that you have to find a combination that works for you.

Finally, here’s a link to my vim configuration in case you want to take a better look: vim-dotfiles

Firefox is the de-facto open-source internet browser. It’s fast, it’s sleek and using the new Firefox WebExtensions and tridactyl one can browse the web like it’s Vim (3).

Alacritty represents a newer trend in terminal emulators in that its objective is to render the terminal output using the computer GPU. Other than that, its developers strive to keep it minimal by not implementing additional features such as preferences window GUI (everything is managed by a YAML file) multiple tabs, split panes etc and instead keep it simple and fast. For most of the functionality that’s omitted (e.g., split panes), they advice the usage of a tool designed for that such as … 🥁 Tmux!

Tmux is the modern alternative to the good-old screen multiplexer. The big difference compared to its predecessor is the good list of plugins and customisation options it gives to its user. It comes with its own plugin manager tpm along with plugins such as tmux-yank, tmux-continuum , and tmux-resurrect which significantly enhance the Tmux user experience.

Finally, I’m using Bash for general navigation, system-interaction tasks. Bash is the default Linux shell, and 99% of Linux machines you encounter will have it. Yes, I am aware of zsh and the billion of plugins that it offers. In general it is a superior shell compared to Bash but honestly the difference is not big enough to counter for the fact that bash is ubiquitous and eventually you’ll be forced to used it when working on a new machine / someone else’s laptop.

Here’s my terminal configuration at the time of writing this: 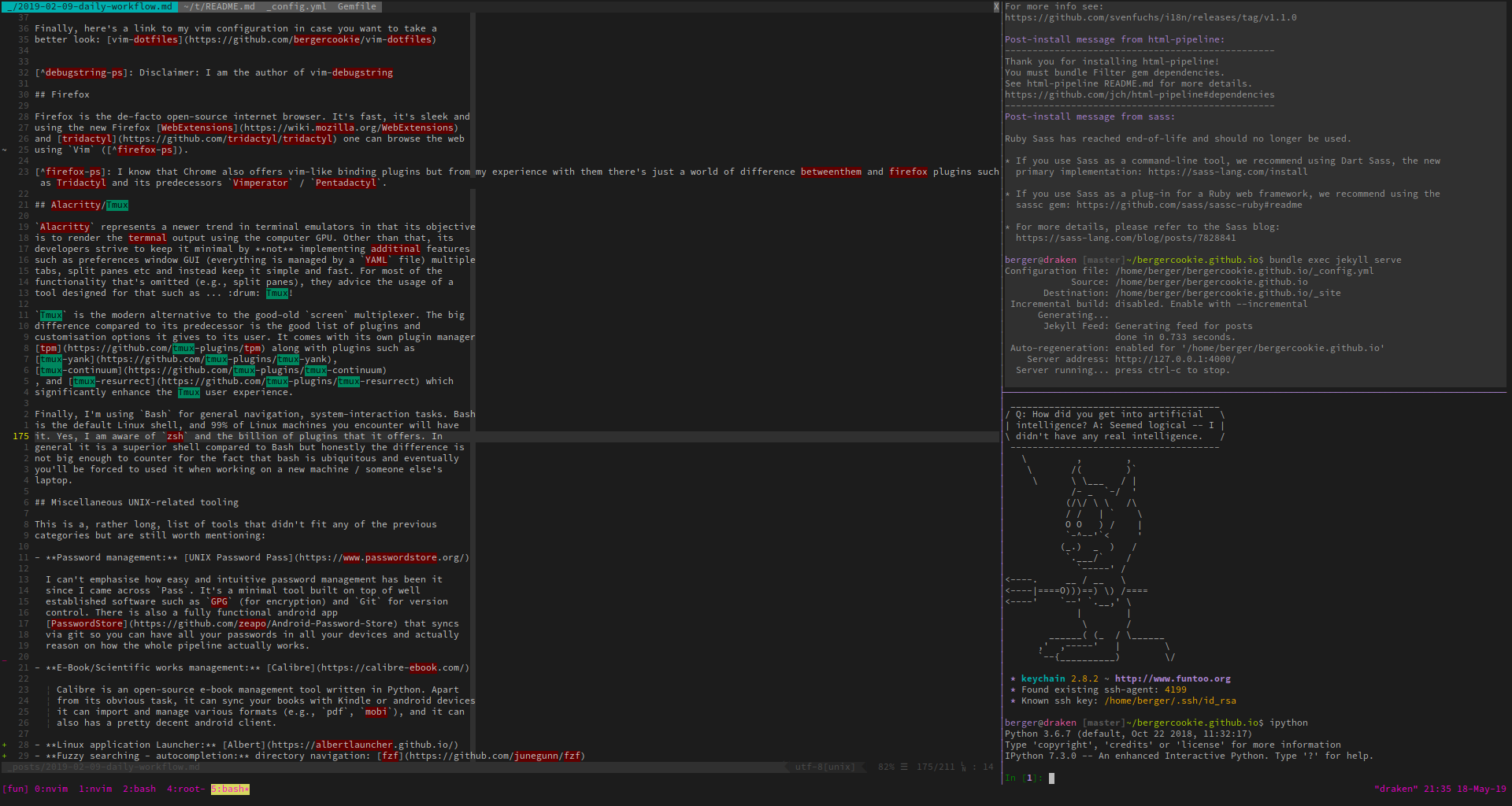 i3 is a tiling window manager, meaning that it’s designed for placing windows as individual tiles in your screen(s). Since Tmux does most of the heavy-lifting in the terminal (splitting to panes, multiple sessions, multiple named windows etc.). i3 gives you (almost) the configurability of a window manager such as awesome but with much less hassle for configuring it to reach a version that works.

I use i3 mainly for the following:

This is a list of tools that didn’t fit any of the previous categories but are still worth mentioning:

More on the menu - feedback#

As this is my first post, feel free to add some feedback in the comments and let me know what you think of this.