I’ve lately been very active developing plugins for the Albert launcher for many parts of my daily routine. For those of you that don’t know it, Albert is an application launcher for Linux. It’s written in C++ and its GUI is built on top of Qt. The current post is a short summary of the plugins I’ve implemented to automate parts of my current routine and maximise my productivity along with advise and, hopefully, useful information on how to do the same for your needs via Albert.

If you want to extend Albert’s capabilities you basically have two options:

In my case, I followed the latter approach and in the last ~3 months I implemented a series of plugins to automate parts of my daily routine. All the plugins as well as the overall content of this article can be found in the awesome-albert-plugins repo. Following is a list of the plugins I implemented, along with a short description of what each plugin does:

Here are some demo pictures of these plugins: 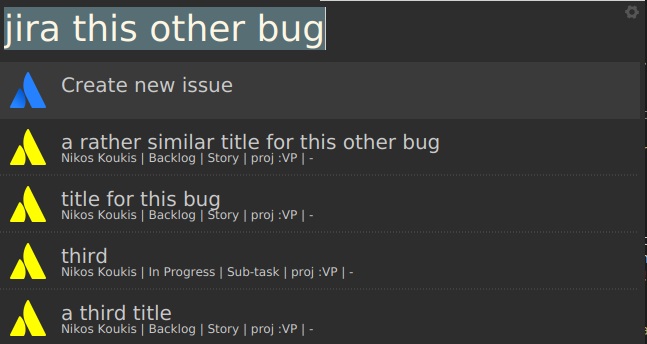 Do a fuzzy search of your assigned JIRA tickets

Since I spent a good deal of time writing these plugins, I figured I could share some of my conclusions, shortcuts into writing a new plugin for your own usecases:

That’s all for now. Let me know if this has been helpful or has given you any inspiration for making your own extensions.